Santorini and Mykonos are the two most famous and the two most visited islands in Greece. A common issue when planning a vacation to Greece is choosing between these islands.

Shopping
Both these islands are amazing shopping spots, but Santorini has multiple towns with incredible shopping, like Fira, Oia, and Kamari, but Mykonos generally has almost all of its shopping in the main town, Mykonos Town, with some shopping in Ornos. But, since Santorini has more shopping I would choose it.

Santorini
Nightlife
Again, both islands have great nightlife, but I think that Mykonos would win this one. Many people go to Mykonos just for the nightlife, and it’s pretty much known as an island that is more awake at night than it is in day. Santorini has most of its nightlife in the capital, Fira, though.

Mykonos
Natural Beauty
Santorini would win this one. Though both islands are very beautiful, Santorini has a more breathtaking feel to it, with the jagged caldera views out to the deep blue Aegean sea, colorful beaches, and traditional Greek buildings hanging over the caldera. Mykonos has the views out to sea too, but in Santorini, the caldera makes all the difference.

Santorini
Beaches
Mykonos. It is known for having some of the best beaches in Greece. Though Santorini does have some great beaches, Mykonos has soft sand and long streaches of beach, while Santorini has rocky, less sandy beaches. But, if you want to visit some more unique beaches, then opt for Santorini, but I still think Mykonos wins. 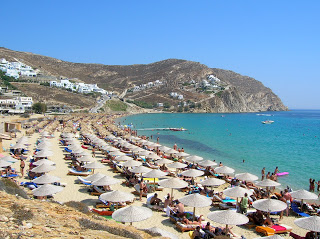 Mykonos
My Personal Favorite?
My favorite island out of these two is Santorini. I just think the amazing caldera views, the volcano, and historical sites make it much different than any other Greek island. I love Mykonos too, but not as much. If I had to choose another island to go with Santorini, though, it wouldn’t be Mykonos, it would be Paros. Despite my opinions, Santorini and Mykonos still remain the two most famous Greek islands.

Published by Dhatri, the Voyager

Hi! I'm Dhatri, the Voyager. Voyage the World is my travel blog, where I post itineraries, travel tips, and top ten lists. Join me on my voyages of the world! View more posts